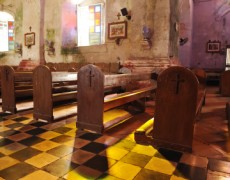 What does it say that atheists in London have formed their own “church”?

Several news outlets have recently featured stories about Sunday Assembly, a “church” comprised of atheists who meet each Sunday in a deconsecrated London church.  According to one report from the Spring 2013 volume of Leadership Journal, “it looks a lot like Christian churches around the corner — just without God” and features a welcome, announcements, a message brought by a guest speaker, readings, and of course, the congregation singing to hit songs by Queen and Stevie Wonder.

Much of the coverage about Sunday Assembly draws attention to the fact that people deeply long for communal gathering regardless of their spiritual beliefs.  And, some point out, people want opportunities to connect with purposes that are bigger than themselves.

But what is intriguing to me is not that atheists would want to gather together or even that they would mimic the liturgical structure of many evangelical services.  Rather, I’m more interested to know how much of that “need to gather” fuels our own churches, and whether these same needs are more of a factor behind the success of our consumer-oriented churches than we’d like to admit.  What if we found out that the longing for “communal gathering” and being part of “purposes that are bigger than ourselves” are a more significant reason for people filling our pews than a commitment to the life to which Christ calls us?  What if we learned that the people in our own churches would raise their hands in worship to “Bohemian Rhapsody” as readily as they would to “Mighty to Save” or “From the Inside Out” if they obediently sang along with whatever words we put on the PowerPoint?

Our series on the Purpose of the Local Church took on many of these topics in greater depth.  But one application that really stuck out to me was that the form of our worship services forms those who attend them.  If we want deeply devoted followers of Christ, a format involving a stage, stadium seating, spot lights, fog machines, and a video screen magnifying the faces of those who are leading in worship may be working against the desired result.  That form, however, could easily meet our need to connect with others, belong to something bigger than ourselves, and sing songs together.