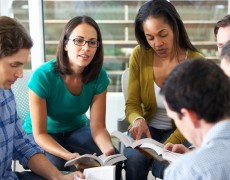 As discussed in our previous post, while Christians are keenly interested in hearing from God, our churches are structured in a way that misses one of the key ways in which God speaks: the deliberation of the body.  This method was strongly evident in the Acts church, even at a time when the apostles also experienced visions, dreams and the audible voice of the Lord.

But can churches practically engage in deliberation?  After all, our churches – especially our “successful” ones – have grown to a size where this type of interaction is unwieldy.

It’s difficult to fairly address this question because we have limited our thinking about how a church service should look.  In our mind, a service involves a large gathering for worship, where a central figure will do the speaking, and the rest of us will receive and retain his or her presentation in silence.  Setting aside all of the research establishing that this is far from the actual result, it remains true that the form of our church service can work against incorporating deliberation into our liturgy, a practice which would greatly benefit the American church — especially those seeking to engage young adults and authentic seekers.

The form of our services inevitably shapes those who attend.  If we continually insist on a form of musical worship that mimics a rock concert down to the smallest detail, should we be surprised that our church attenders are fickle groupies of Jesus (or more accurately, their favorite worship song or the worship leader)?  And what about our form of equipping the body?  If we imagine that a single speaker has the power to inspire us all, and that the rest of us will openly receive and permanently retain that information, is it any wonder that the failure of this method of communication has led to such shallow knowledge of the gospel, of our doctrines and of our theology?

So how can a large church practically engage in such deliberation?  We are skeptical that any such practice can take place in the large body, mostly because of our discomfort with anything other than a carefully orchestrated stage show.  Yet, it can be done.  As just one example, our church began placing mics in the aisles and inviting questions or comments after the sermon.  While this is different than the interactive method we used in Exodus, where interaction could come at any time, allowing people to comment after the sermon still recognizes that the Spirit indwells us all, and that another participant in worship may have something important to say which the Spirit could have prompted.  Or a seeker may actually believe us when we say that our church is a safe place to ask questions.  What better way to live up to the promise we have made than to allow them to actually ask a question.

A young adult leader at a large mega-church once commented incredulously about the interactive method we engaged in Exodus: “How can you possibly teach the truth if everyone keeps interrupting you?”  His dismay was only surpassed by my own.  How sad, I thought, that we have built churches where young men in their thirties and forties think that they have a monopoly on the truth, and that if those in attendance would just shut up and listen, they would all grow into mature disciples.  Sad indeed, but it seems that almost every church lives out this philosophy Sunday after Sunday, whether consciously or unconsciously.

Our other temptation is to allow deliberation only in small groups.  Don’t get me wrong, there are many reasons that small groups are valuable and needed, but often our motivation for the small group is to maintain the large group.  We say, “No one could possibly find meaningful connection in such a large body,” so we design small groups as a way for people to connect, to find accountability, and to do “life together.”  But we rarely question whether the larger body has grown too large, and whether it is time to reform into smaller churches, not groups, and to plant outward.  The same is true with deliberation.  We say that our church services are too large to allow for such deliberation, but we might allow for interaction in a smaller group setting.  That’s a way to have “both/and,” the Christian phrase which means, roughly translated, “have your cake and eat it too.”  In reality, we are saying that we would rather jealously guard our size and growing influence, our nicely choreographed service, and the polished image we present to church shoppers.  There is no way we would jeopardize that for a chance that the Spirit might bring something to the service.  That sounds downright Pentecostal.  And besides, people have come to this church to hear from [fill in the name of your top draw pastor], and not anyone else.

Having facilitated an interactive forum for almost a decade, I know it can get messy.  I know that the best laid plans can break down along the way.  I know that one person’s issues can sometimes take us down a rabbit hole, and I know there are moments of discomfort when people actually voice what they are feeling, and stop nodding their head politely while pretending to agree with you.  But I also know that the most powerful insights and clear teaching of the Holy Spirit were heard in our midst.  I know that we recorded the very promptings of the Holy Spirit through the comments and the questions which were raised.  I know how a discussion that involved everyone continued to be retained and to produce fruit for days and weeks afterward.  In short, I know that what happened in that room was nothing short of supernatural. As a testimony to what we experienced by the grace of God, I’ll elaborate on those experiences in another blog post.

For now, it might simply be enough to say: Yes, it is true that deliberation is difficult to do in larger settings.  But if we want to open up another avenue of hearing from God that we have long ignored, maybe we should stop questioning how we can practice deliberation in large groups, and start questioning the size of our groups.