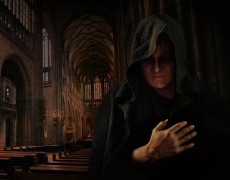 Oh, the Protestants, we love our books.  And why not?  It was Martin Luther, the great reformer, who said that printing was God’s “highest and extremest act of grace.”  After all, the printing press finally allowed widespread access to the scriptures, giving fuel to the Reformation along the way.

In the Middle Ages, people did not have access to the scriptures.  Instead, the clergy were charged with reading the scriptures and interpreting them for the people.  The congregation had to retain the information from what they heard and from what little they could remember.  No wonder their doctrine was commonly distorted, and sound teaching reduced to pithy statements or superstitious sayings.  An uneducated mass could not, it was thought, be counted on to properly handle the scriptures.

Once the printing press led to broad availability of the scriptures, the church enjoyed almost 500 years of growing literacy.  Lay people were able to study the word of God for themselves, and they no longer needed to rely solely on the clergy to have the scriptures read to them.

But in our time, when every translation of the scriptures travels with us on our phones and tablets, are we any more Biblically literate than our medieval counterparts?  When the abundance of available resources for reading and understanding the scriptures is overwhelming, can we say that we are any more likely to access them?  No wonder our understanding of key doctrines is commonly distorted, and our teaching reduced to pithy statements and superstitious sayings.

We are in danger of becoming the medieval church all over again, where the clergy are the only ones that read and interpret the scripture for us.  This time it is by our own choice, not the clergy’s.  We expect to grow in wisdom and maturity by sitting dutifully on a Sunday morning for brief, unconnected snippets of the scriptures, soaked in a brine of self-help motivational speaking, stand-up comedy routines, personal stories and pop cultural references.  And then, in a time when our ability to retain information transmitted orally is virtually zero, and our attention span has a similar length, we think we can preserve that information and build upon it the following week.  Unfortunately, the reality is that the most likely parts of a sermon to survive past  lunch are the anecdotes and funny one-liners.

Let’s face it.  We are not masters of the oral tradition.  Yet, rather than read the scriptures for ourselves, more and more of us have resigned ourselves to having the clergy read them to us.  From that point, we repeat loose paraphrases to our friends.  This becomes akin to the children’s game of telephone.  I tell you a line, then you whisper it into the next person’s ear, and they do the same, and so on.  By the time the phrase has been repeated to the fifth or sixth person, it scarcely resembles the original statement.  And that’s the danger with how our teaching is transmitted today.  We have become accustomed to repeating mostly paraphrased and decapitated segments of a sermon, mixed in with anecdotes and pop psychological references, which continue to mutate each time they pass from one person to another.

Much has been written about our increasing Biblical illiteracy.  The trend is fueled in part by the growing number of Americans who don’t read books of any kind: according to a Pew Research Center report released last month, 23% of Americans did not read a single book during the past year.  Other surveys have pegged the number slightly higher.  I wonder if we recognize how much we are becoming reliant on the clergy to deliver our faith to us, driving our own Biblical literacy back to the Middle Ages.  Next time we think about ways to increase generosity, it might just be easier to start selling indulgences again.