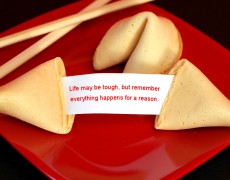 Are we equally comfortable telling someone that everything happens for a reason in all four of the circumstances above?  If not, is this statement only true for the mundane difficulties in life — the ones we think others should recover from easily — or does it also apply to real tragedies?  Does the inconsistency in how we use this phrase reveal that we don’t believe this phrase to be universally true?  And when someone asks us what the “reason” might be, how do we respond?  How can we presume to know the reason, let alone to know that it’s a good reason? If we were honest with ourselves, our real motive behind the use of this phrase is to dispense with the other person’s situation. Rather than sit with them in their difficult circumstances, willing to live with them through the range of emotions that accompany suffering, we are simply patting them on the backside and telling them to get back into the game. Why are we so quick to write off real issues with trite phrases?  Is it because we don’t want to take the time to walk alongside another? Do we find it much easier to simply sprinkle them with meaningless phrases in the hope it will cheer them up? Are we hoping to prepare ourselves for the times that we, too, might be touched by unexpected tragedies, declaring in advance that tragedies must have greater purposes? Maybe it’s just easier than facing the realization that life is not always happy and trouble free. Most likely, we use this phrase because others have used it with us. We have learned to do the same, much like saying we are “great” when someone asks us how we are doing. Perhaps a more helpful response to the difficulties experienced by others is to truthfully admit that we don’t know why these things have happened, and to instead sit with them for a much longer season than the momentary comfort that accompanies trite phrases.