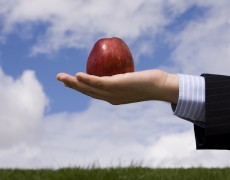 One more than one occasion, I have had the chance to teach on the Lord’s Prayer.  In addition to our series in Exodus, which you can find here, I recently preached on the Lord’s Prayer at NewSong Church.  Each time I got to the line “and lead us not into temptation ” (Matthew 6:13a), I struggled with how to best explain this petition from the prayer.

The prayer Jesus gave us to pray serves a model for all of our prayers, and there is deep meaning to each and every line of the prayer.  So I knew there was a deep insight that lay just underneath these words that I had not yet applied in my own life.  I just needed to experience these words a deeper level, to not only understand them in my mind, but in my heart as well.

The petition seems a bit odd at face value.  Why would we ask the Lord not lead us into temptation, especially when scripture tells us that the Lord does not tempt us? (James 1:13-14)  Those who have written extensively about the Lord’s Prayer often remind that the real meaning of the words is better translated as, “Keep us from falling into sin when we are tempted” (New International Reader’s Version).  This certainly made sense to my mind, but the words had not yet resonated with my soul.

In 1 Corinthians 10:13, Paul teaches that “No temptation has overtaken you except what is common to mankind. And God is faithful; he will not let you be tempted beyond what you can bear. But when you are tempted, he will also provide a way out so that you can endure it.”  And Hebrews 12:4 reminds that “In your struggle against sin, you have not yet resisted to the point of shedding your blood.”

These verses work together to show us that while the Lord does not tempt us, He does allow us to walk through circumstances where the trials we face might tempt us to sin.  During these trials, there is a way to avoid sin, even though the way out of temptation may be difficult and accompanied by significant personal cost.  And all the while, Jesus encourages us to pray that God would nevertheless keep us from facing these trials, so that we might be spared of these situations altogether.

A month after I last taught on this petition, I found myself fervently praying the same words, but this time appreciating this line of the prayer at a level I had not previously grasped.  In my own professional life, I was facing very difficult circumstances, ones that could cost me dearly, perhaps even my entire career.  The easiest way to avoid these consequences would be to lie, to simply deny the facts as I knew them, and to distance myself from any of the fallout.  But I felt at my core that this was exactly the type of trial that these passages were referencing.  It was my time to see if I would be able to withstand the temptation to sin, despite the cost, or whether I would give in to the temptation that grew stronger as the stakes grew higher.

Over and over, I have found myself praying “lead me not into temptation” during the past few months.  Sometimes it was just a mediation on these words.  Other times it was imaging the very questions I knew could come, and wondering if I would ultimately stay true in the actual moment.  Mostly, these words became an impassioned plea that asked the Lord to not even allow me to face such a trial, much as Jesus pled in the garden, only to keep in mind that He, too, surrendered to whatever the Father would ultimately bring about.  I don’t know if any of my prayers made sense in the logical, systematic way that we often demand of a theological formulation, but they were among the most honest and helpful words I knew to pray.  They became constant companions as I spent time laying out my heart before the Father.

Perhaps it’s the fact that I want my life in Christ to be easy, without any real trials or challenges, that has kept me from understanding these words for so many years.  But I can finally say that this line of the Lord’s Prayer is no longer a throw away, no longer a transition on the way to asking to be delivered from evil.  It is now a living part of the prayer that will undoubtedly become increasingly more real as I encounter again the troubles that are inevitable to come in this life. (John 16:33)