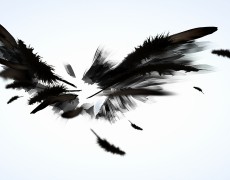 In Greek mythology, Icarus and his father Daedalus were exiled on the island of Crete for having angered King Minos.  To escape their confinement, Daedalus fashioned two pairs of wings out of wax and feathers so that he and his son could fly away from the island.

As they began to take flight, Daedalus warned his son not to fly to close to the sun.  But we all know what happened next: Icarus became so enchanted with his flight that he lost sight of his father’s instruction.  As the sun melted the wax away, Icarus found himself plunging toward the sea to his death.

Our hearts soar at the idea of escaping confinement and finding the freedom of flight, but they plunge at the tragedy of such a quick demise.  The story of Icarus has been on my mind as I encounter so many college and graduate students who meet the same fate: they experience the wide open expansion of their mind as they enter Christian colleges, but a significant number come crashing back down to earth with melted wings not far behind.

How do we steward the beautiful gift of Christian higher education without inadvertently sending our students on a suicide mission?  How do we balance Christ’s command that we love God with all of our mind, while holding in tension that He also commanded a love that involves all of our heart, soul and strength?

We can always shift responsibility to those who, like Icarus, may have been predisposed to a tragic end.  We all know students whose faith is shallow and unexamined, born on an island of Christian culture as isolated as Crete itself.  Or there are those who were nurtured on a diet of Christian triumphalism that guaranteed a happy and successful (American) life if they simply professed belief in Jesus and kept away from worldly vices.  Encountering real life struggle or any type of intellectual challenge quickly melts away the wax that holds their faith together.

Still others are consumed by a self-righteous crusade against their own faith, convinced that they alone have uncovered the issues plaguing the church’s orthodoxy and orthopraxy.  Fueled by their emotions, they fly far out of reach of those of us who have confronted these same issues, but who have also learned with humility the transcendence of God’s sovereignty over the church.  Jars of Clay personalized the experience when they sang: “I am the only one to blame for this / Somehow it all adds up the same / Soaring on the wings of selfish pride / I flew to high and like Icarus I collide.”  Nine Inch Nails said it more plainly:  “Flew too high and burnt the wing / Lost my faith in everything.”

But what responsibility do those of us who teach in higher education have when we are the ones who fashion these wax and feather wings?  Many of us lament the outright hostility to faith that has become its own institutionalized religion in secular universities, but how is it that so many students at Christian universities experience the same loss of faith, especially while they are still at school?  Can we really say that our tendency to want to free every mind from the confines of smallish thinking never results in a crash to earth?  As educators, an honest confession would be that we often relish the chance to give flight to our student’s minds, but frequently fail to safeguard the souls that accompany them.

Many Christian professors deconstruct students in order to break down what they consider elementary or fundamentalist beliefs, with the goal of replacing those beliefs with more mature formulations of our faith.  Of course, what qualifies as “mature” depends on personal bias, and we rarely disclose this bias to our students.  To say it plainly, many of us are tempted by an unconscious (and sometimes conscious) desire to deconstruct a student’s beliefs so that they can adopt the “right” way of thinking.

Deconstruction is a good first step to a more mature understanding, but deconstruction by itself is sinful and abusive unless we are committed to reconstruct these students.  Anyone can take apart an engine given enough time and the freedom to do damage to its parts.  But which of us has the skill and patience to put it back together again so that it works even better then when we first took it apart?  Perhaps we have deluded ourselves into believing that this process will happen on its own, or that the act of deconstruction is valuable by itself, so we ship these students off to another class and prepare to deconstruct the next group we encounter.  But we must not be tempted by our desire to remake the world in our image if the end result is to leave another person’s faith strewn around the driveway in pieces.

We are seeing more and more students leaving the faith when their formulations melt away in this pluralistic and interconnected world.  After all, the arguments against faith advanced by skeptics travel with them on their mobile devices and enter into their social media conversations.  The answer is not to ground all those who might otherwise wish to take flight.  We need more critical thinking, not less, and more ways to help students process their doubts and discuss how their beliefs intersect with the realities of the world around them.

But we need to remain committed to cultivating all aspects of a person’s spirituality.  In order to do so, we have to make every effort to travel with our students in committed, long-term relationships before we take on issues that can affect their faith if left undone.  Even when I hear a student expressing strange beliefs or relying on a misstated theology, I have to check myself and avoid the temptation to say anything unless I know that I am going to be around for the long term so that we can work toward rebuilding what we have taken apart.  This type of discernment is key.  Knowing when not to challenge a person’s formulation of faith is just as important as knowing how to do it when the time is right.

Let’s steward the gift of teaching seriously.  Deconstruction without reconstruction is sin, and we should remember that the penalty for causing any of these little ones to stumble involves a millstone and the depths of the sea.  (Matthew 18:6)