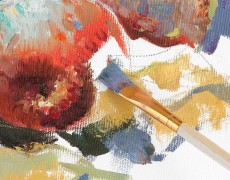 The paintings of Vincent Van Gough are among the most valuable and sought after artwork in the world.  Yet Van Gough remained a starving artist during his lifetime.  Similarly, the works of Johann Sebastian Bach were not appreciated until his music was rediscovered in the early 19th century, well after he had passed on.  And few would consider Edgar Allan Poe a struggling writer, yet his writing barely earned him a living during his lifetime.  None of these artists — nor numerous others who are now famous in their fields — ever saw the success of their own contributions during their lifetime.

We naturally consider the end of our life to be the conclusion of our life’s work.  But I wonder what God could accomplish through us if we saw our life’s work as something that could only be completed by the Lord after we had departed this life.  What if we were intentional about building our life’s work so that it had to be completed by someone else, such that without God’s involvement, it would not come to fruition?  What if we trusted that God would inspire others that came along after us to bring about the culmination of what we began?

It takes tremendous faith to pursue something that has no tangible results during our lifetime.  When God first calls Abram (Abraham) in Genesis 12 to move to the land shown to him by the Lord, the Lord promises to make him into the father of a great nation and to give the promised land to his descendants.  Yet Abraham was told the promise would not be fulfilled for at least 400 years. (Gen. 15:13)  Abraham would not see the great nation that was to become a blessing to the peoples of the earth, nor would he possess any part of the land that was promised.  Yet relying on the fact that God could finish the story that was begun during his lifetime, Abraham chose to follow the Lord nonetheless.

Like an artist who paints, composes or writes in relative obscurity, how many of us are involved in work for the kingdom of God that is done without recognition?  While many ministries seek maximum impact (often measured by what we can see or count), how daring would it be to offer our life’s work to God in such a way that it would never reach its full potential unless He chose to bring that work to light?  What if we actually meant what we said when we claim that God should get all the glory?

If we have difficulty committing ourselves to the Lord’s work without immediate evidence of how our efforts will impact others, perhaps we should examine our tendencies towards control and pride.  We should acknowledge that a life lived in Christ should result in fruitfulness (John15:5), but a desire for visible impact and widespread recognition during our own lifetime might be hallmarks of a struggle with pride.

What tasks does God have for you that may outlive your own life?  What body of work could you begin that could only be completed if God chose to continue that work after you have left this life?  If we say that our work is meant to be done in partnership with God, do we have the faith of Abraham to believe that God would continue working to bring about His results long after we have quit this earth?