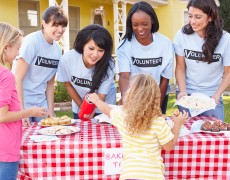 One ever-present element in the Christian culture is a fundraiser for a worthy cause.  It might be a building initiative, a mission trip, the construction of a water well or raising scholarships to send kids to camp.  The selling point is always the same: if everyone were to just put in $X, we could reach our fundraising goal and the task would be accomplished.

Setting aside the fact that it is sacrificial giving that is taught in the scriptures, not fundraising, the practice of fundraising has several downsides.  The first is that it seems to shift the financial burden to others.  We might even define fundraising as “using other people’s money to accomplish the Kingdom tasks to which we have committed.”  That doesn’t seem right.  We are fine giving our heart and soul to the mission, but we somehow stop short of opening our own wallet.

This can even lead to an insidious form of bargaining with God, where we convince ourselves that we have given so much time that others should be the ones that are supplying the money.  There is no doubt that we should steward both time and money for the Kingdom, but it is a sure sign of a struggle in our heart when we are hoping to trade our time in order to keep our money.

Of course, allowing others to share in the mission through their giving is a way to include more people in what God is doing.  That would put a more positive spin on fundraising, so long as it is not a way to rationalize the fact that we are hoping to avoid giving our own funds.

But fundraising can also be terribly inefficient. Some friends of ours recently participated in a fundraiser so that a local church could help pay for its VBS.  A local pizza restaurant agreed to contribute 20% of the proceeds from those who were affiliated with the church and ate at the restaurant.  A great effort was made to get the word out about the pizza night, and the church was able to raise about $175 — after more than $800 in pizza was consumed.  I couldn’t help but wonder if it would have made more sense to just skip the pizza and simply donate the amount spent on food directly to the VBS.  Even a portion of what was spent that night could have raised more money.

Some might point out that those who participated were going to spend money on food anyway, so it makes sense to eat at a place that allows some of the money to go to the fundraiser.  This assumes that people were going to eat out that night, and it hides another downside of fundraising.  When we begin to train people to give only when they get something in return, or only when it is convenient or easy to do, we miss the chance to train up our people to true generosity and sacrificial giving.

Another church I know is a good example of the pitfalls of giving-when-you-benefit fundraisers.  Years ago they began to host an annual festival to raise additional money for the church’s budget.  It succeeded in bringing in a good amount of money.  So the choir also started hosting a dinner and sing along.  This was followed by other groups hosting a New Year’s Eve fundraiser, and two other dinner parties throughout the year.  These events take substantial effort to put on, and each requires significant commitments from volunteers and church staff.  But more importantly, while these events were intended to augment the church budget, they now comprise more than half of the church’s revenues each year.  What started as a way to raise additional funds became a required way of balancing the church budget.  Over time, the congregation learned that the way we “give” is to pay for fun events, dinners, parties and raffle tickets.  Weekly offerings continue to slide, while it appears the church is stuck on a fundraising treadmill in order to raise sufficient funds to operate the church.

I’ve watched students sit for hours selling donuts to raise money for trafficked women, with the net result being less than twenty-five dollars in proceeds.  Had those who operated the table simply worked one hour each at minimum wage and donated that amount, more would have been given (and we all would have weighed less) than the paltry profits from donut sales.  It seems that fundraising will always be among us, but we should use it sparingly, and always with attention to our tendency toward idleness and the temptation to use other people’s money to fund the mission God has given to us.