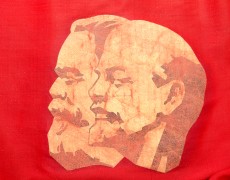 Spending time in Russia inevitably leads me to think about the communist system, especially when you see how quickly it was replaced with a Russian form of capitalism after the fall of the Soviet Union.  Karl Marx famously proclaimed that “religion is the opiate of the masses,” but it seems that he may have missed the fact that material possessions are the strongest opiate of all.

Marx borrowed some of his animosity toward religion from earlier thinkers, and Vladimir Lenin later expanded on this statement: “Those who toil, and live in want all their lives, are taught by religion to be submissive and patient while here on earth, and to take comfort in the hope of a heavenly reward.”

How strange those sentiments seem when we observe the intersection of capitalism and faith in the 21st Century. A century ago, workers may have been oppressed, and these critics blamed religion as the tool used to keep them eagerly working while hoping for a reward in the life to come.  But as I return again to visit the land of Marx and Lenin, I can’t help but notice that it is something quite different that keeps people going to work day after day.  And it’s no different than what drives us in the United States to toil our life away.

Many of us would say that we are better off, and that we have the freedom to determine how much we work and how far we get ahead.  Even if that were true, we use our freedom to work so that we can purchase material possessions on an ever-expanding wish list, to maintain and replace those items, and to pay down the mounting pile of debt we find ourselves in just to have it all now.  So much of our income goes solely to housing expenses and the cars we drive.  Some estimates find that these two items alone account for 75% of our after-tax income, up from less than 50% of the average family’s income a half century ago.  Add to this the fact that more people are living in two income households than was the case 50 years ago, and it quickly becomes apparent that we are spending more and more of our incomes just to keep up with where and how we live, seeking larger homes, nicer cars and endless consumer goods, while our life is eaten up by an increasing number of hours at work just to maintain it all.

So does our belief in the afterlife keeps us working?  Is that the reason that so many Christians work such long hours, because we hope that God will reward us?  Hardly.  We have become so accustomed to building heaven on earth – to feathering our own nest – that I doubt it factors into our conscious decision making at all.  When confronted with the choice, it’s certainly a nice alternative to hell, but it doesn’t compare to the life we are building for ourselves here.  It’s becoming increasingly hard to convince others about the good news of eternal life when we ourselves seem content to cling so tightly to this temporary world.

So it seems that Marx and Lenin were wrong on both accounts. Possessions, not religion, are the opiate of the masses, and it is the hope of a life filled with material goods that keeps us working, not a belief in the afterlife.  Maybe Marx was a product of his time, born into a world that could not imagine globalization or the growing middle class which in almost every country would willingly trade the majority of their waking hours for the chance to come home at night to earthly comforts. It certainly seems that the today’s Russian masses have wasted no time in finding fulfillment by means of the fleeting highs that possessions can bring.

Jesus was once approached by a disciple who said that he would follow Jesus wherever  He went.  Most of us would immediately affirm the man’s gesture.  But Jesus had a warning for the man.  He said, “Foxes have dens, and birds have nests, but the Son of Man has no place to lay his head.”  (Matthew 8:20)  Apparently Jesus thought it important to temper this potential disciple’s enthusiasm with a stern warning about the type of life that often accompanies true discipleship.  I wonder what words of warning Jesus would have for those of us who claim to eagerly await eternal life, but who remain heavily intoxicated in our endless pursuit of accumulating every comfort for the place that we lay our head.