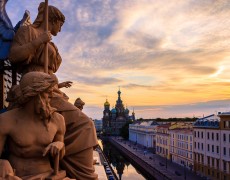 I spent the morning worshiping alongside Russian brothers and sisters at St. Petersburg Christian University at a time when relations between Russia and the West seem to be growing more tense every day.  It was my fifth time in Russia, the prior four times having served on short term missions trips with our Russian sister church. Even though our travels with family kept us far away and unable to visit our sister church, we managed to spend the day with two friends from the church who had relocated to St. Petersburg.

During the worship service, I was struck with the reality of how it is that Jesus Christ alone can bring peace to this world, both now and in the world to come. It’s a curious claim because there is ample evidence that leads us to the belief that we can never have peace in this world.  Yet surely, Jesus brings peace in many ways.

One of those ways may be in the way He unites many diverse believers within His body, many whom would otherwise be suspicious strangers with no reason to meet as one.  I was reminded of this fact as I transitioned from reading the competing narratives that were playing out in the Sunday news, to singing familiar songs in an unfamiliar tongue during Sunday worship.

What is it about our common belief in Christ that unites us as one body?  Is it just the fact that we profess a common faith, or that we have come to an agreed-upon set of core beliefs?  The reason has to be deeper because our sinful nature could not be overcome so easily.

There are many unifying ideas that people around the world could adopt, but none seem to bring true peace.  In our very nature, we do not know peace nor do we truly want it.  We could all claim our unity from a variety of unifying ideas, from the pursuit or knowledge, a certain form of government, distribution of resources, or an effort to value those different from ourselves.  But in the end, whatever common belief we claim, peace remains elusive.

That is why it is not simply our common belief in the tenants of Christianity that allows us to have peace.  It is Jesus Christ Himself. For when we are born into the family of God and adopted as His brothers and sisters, we are sealed for adoption by the Holy Spirit.  The work of the Spirit does not stop there.  Every day by His power we become more and more like Christ.  And it is in becoming more like Christ that we increasingly become peace itself.

I notice how Christ transforms even my Russian brothers and sisters.  Russians are not known for their openness towards strangers.  Some mistakenly think Russians to be unfriendly, but anyone who has seen Russian friends embrace knows otherwise.  Rather, it is a cultural difference.  Russians see it as foolish or disingenuous to greet those who are unfamiliar, cheapening the welcome they would give to a true friend.

And yet this morning, I was surprised by the number of Russians that came up to me on their own before the service, introducing themselves by name and holding out their hand in welcome.  Their friends outside the Christian community would not have understood the gesture, but I knew it well.  Having received Christ as our peace to reconcile us to God, having been welcomed by Christ Himself into the family of God, and having been given the mandate to love others and to seek the lost, these brothers and sisters were not going to miss an opportunity to demonstrate the love of God by welcoming anyone who would be in their midst – stranger or not.

In a much grander way, God through the power of the Holy Spirit is changing us.  It is not simply the common beliefs we profess together as Christians; rather, it is who we are becoming together in Christ that makes this unity different than any other.  Peace is possible among the nations because we have a common Lord who changes us from the inside out, making us into a people who share peace, because He is the Lord of Peace.